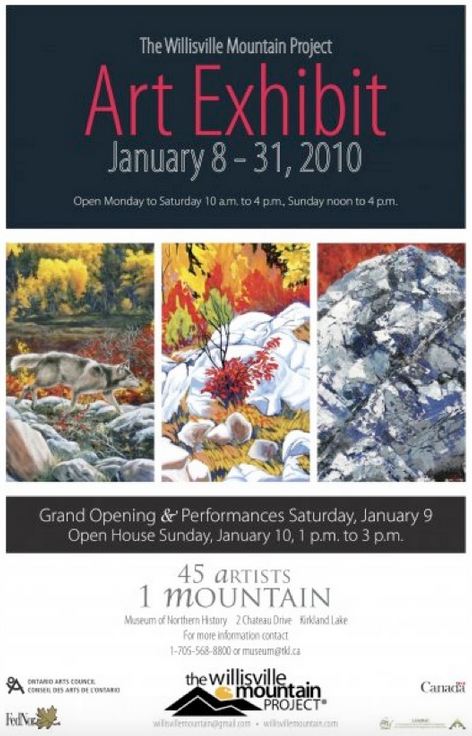 The Willisville Mountain project was initiated in 2009 by Jon and Kerry Butler, Sophie Edwards and Christi Belcourt after it came to light that Vale (then Inco) owned the mining rights to the Willisville Mountain and they intended to “quarry” the mountain. In an effort to save the mountain, the four put a public call out for art submissions to bring attention to the issue. In the end 45 artists were selected for the exhibit which toured to 5 locations (Whitefish Falls, Sheguindah, Sudbury, Temiskaming, and Kirkland Lake) between 2009 and 2010.

Métis visual artist, whose credo reads “based on tradition, inspired by nature,” Christi Belcourt uses the gift given to her by the Creator to “celebrate the beauty of the natural world” provoking people’s hearts and minds through the painted image.

In what began as a simple experiment to paint flowers inspired by the traditional beadwork patterns of Métis and First Nation women, Christi uses a dot technique that leaves the paint raised on the canvas – as if it were a bead. When asked why she chose plants as her inspiration, she replies, “They have helped to heal me, to make me whole as a human being, and a spiritual being. Plants have spirits; they are alive just as you and I are alive. They have taught me about the interconnectedness of all things and about having respect for everything that exists. Everything is wholly dependent upon the plant world: the insects, the animals and us. Human beings are the weakest in Creation because we need everything else to survive.”

Through her art, Christi also seeks to bring awareness to environmental issues, one of the main currents pervading her work. Located in the Boreal Southeastern Transitional Forest, the La Cloche mountain range is one of the oldest mountain ranges in the world. Older than the Rockies, Christi explains, “It is within traditional Anishnaabeg territory. ‘La Cloche’ (from the French “bell”) gets its name from Sinmedwe’ek – “sounding rock” in Anishnaabemowin (Ojibway). Just down the road from Willisville Mountain is “Dreamer’s Rock” it is a sacred place that was used for fasting.”

Portrayed by artists and photographers, including the Group of Seven, Christi, along with 44 other artists will join the list of those influenced by the La Cloche mountain range. Called the Willisville Mountain Project (www.willisvillemountain.com), participating artists showcase the beauty and importance of the area and bring awareness to the mining potential of the mountain.

“The artists who participated in the project were not necessarily aware of this fact before they created their art. We wanted to let them create art that was not influenced by a negative reaction to something. The result was 65 pieces of art that were personal yet a common thread among them was respect of the place, the mountain, the environment and the spirit of the rock.”

“Everything is wholly dependent upon the plant world: the insects, the animals and us. Human beings are the weakest in Creation because we need everything else to survive.”“I have faith in our ability as human beings to change things. The Earth is very powerful and has amazing regenerative powers, so I remain hopeful about the future. It’s important that we continue to teach and learn our traditional ways, and our ceremonies and protocols are very important because the protocols we observe are all about being in balance with nature.”

Realizing the continued health of the boreal forest is being threatened by industrial activities such as clear-cut logging, hydro development and mining, Christi laments, “I have cried many times when coming across clear cut areas. It is the rape of Mother Earth, and to see our Mother treated so disrespectfully…well there just are no words I can use to express how deeply that hurts.” She is optimistic nevertheless, adding, “I have faith in our ability as human beings to change things. The Earth is very powerful and has amazing regenerative powers, so I remain hopeful about the future. It’s important that we continue to teach and learn our traditional ways, and our ceremonies and protocols are very important because the protocols we observe (eg. tobacco first, never take more than you will use, don’t over harvest, thank the animals and plants, etc) are all about being in balance with nature. We need to share these principles not just with our own youth, but with non-Aboriginal youth as well.”

Branching out to other forms of expression, Christi is the author of Medicines To Help Us, a book based on her study – identification, stories, and medicinal uses – of traditional plants. Written as a field guide, the book provides basic information on traditional knowledge and perspectives on boreal plants. For Christi, rediscovering and maintaining the use of traditional medicines includes a holistic approach to health, a method which is lacking in today’s modern approach to treatment.

Christi has won recognition for her artistry and her work has been commissioned widely, including the Gabriel Dumont Institute, the Nature Conservancy of Canada and the Centre for Traditional Knowledge & Museum of Nature, to name a few. Christi is a past recipient of awards from the Canada Council for the Arts, the Ontario Arts Council and the Métis Nation of Ontario.

Her artistic passions outline the importance of her Métis roots, the natural world and environment, art as expression and teaching tool, and her advocacy around these issues. Most decisively, she says, “I think the most important thing we can do as human beings is to love. Out of love comes respect. If you love water, you won’t pollute it. If you love plants, you protect the areas they need to grow, etc. And we are loved by the spirit world, each and every one of us. Our life is so much more than what we see, or who we think we are. I would encourage people to be kind and loving to one another, and if we start there then we will have accomplished a whole lot.”