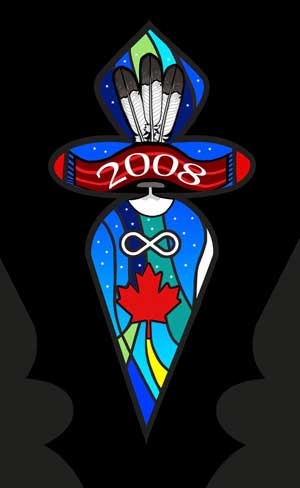 This section commemorates the official Statement of Apology to former students of Indian Residential Schools on June 11, 2008, by Prime Minister Stephen Harper.

On that day from coast to coast to coast, Aboriginal people gathered in community centres and homes to watch the Prime Minister give the statement, and to watch as their own leaders made their historic responses on the floor of the House of Commons.

Reaction to the Apology ranged from skepticism to gratefulness, marked by tears of relief, that finally the hurt that individuals carried was being acknowledged and an apology was being made. Regardless of how individuals reacted to the Apology, mostly everyone was moved emotionally, as Prime Minister Harper spoke the words, “The Government of Canada sincerely apologizes and asks the forgiveness of the Aboriginal peoples of this country for failing them so profoundly.”

In this panel, symbols representing Inuit, First Nations and the Métis Nation are featured alongside the iconic maple leaf. Canada, as represented by the maple leaf, is shown among the Aboriginal icons as a way to symbolize the hope expressed on that day by the Aboriginal leaders in their official response on the floor of the House of Commons. On behalf of all Aboriginal people, Indigenous leaders graciously accepted the apology from the Prime Minister.